Coinbase released its Q3 earnings last week - they’re up 400% year-over-year (which...is a lot). Coinbase has done so well because it’s a “pickaxe business”. The framework for a “pickaxe business” is simple - during a gold rush, when everyone is looking for gold (or Bitcoin on Coinbase), it’s a good time to sell them picks and shovels. The good news? We are in a modern gold rush. 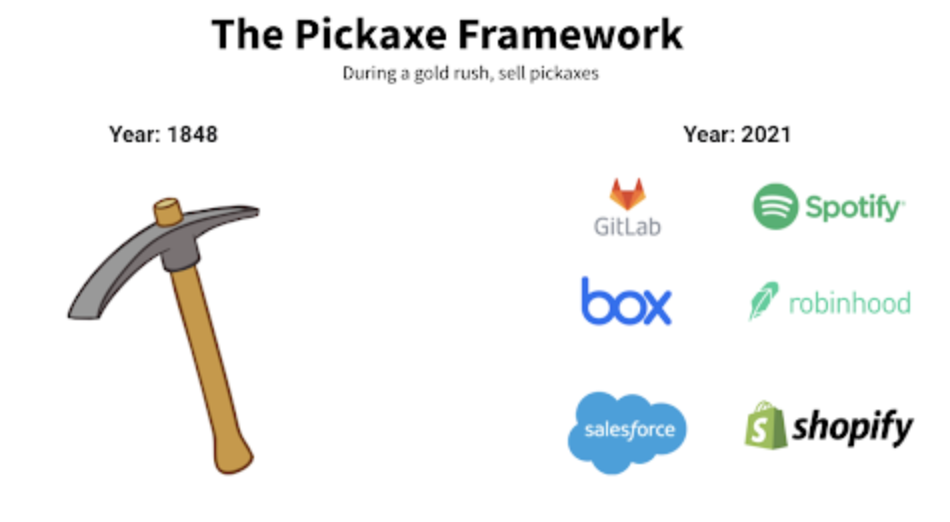 Coinbase has done so well because it’s a “pickaxe business”.

The framework for a “pickaxe business” is simple - during a gold rush, when everyone is looking for gold (or Bitcoin on Coinbase), it’s a good time to sell them picks and shovels.

The good news? We are in a modern gold rush.

⛏️ What is a “Pickaxe Businesses”

💰 Why Coinbase, Shopify, and Stripe use the pickaxe model

🔍 How you can identify pickaxe opportunities.

How to Find a Pickaxe Business

There is an adage in Silicon Valley - “during a gold rush, it’s a good time to be in the picks and shovels business”. If you are hearing this for the first time, it may not make sense. Why not chase the pot of gold?

Let's take a look at the California Gold Rush.

In 1848, the news that gold had been discovered in the state attracted over 300,000 prospectors, known as “forty niners” to the state. It’s estimated that over 1,750lbs of gold were unearthed - worth about $20B.

So, what are the chances of striking gold? About 4%...

So, who made money? Enter the merchant millionaires.

Businessmen like Levi Strauss and Samuel Brannan made fortunes by supplying essential tools to the miners.

In 1853 after hearing about the gold rush, Levi Strauss headed to San Francisco where he established his wholesale dry goods business. In 1872, Strauss partnered with one of his customers, a Reno, Nevada, tailor named Jacob Davis, who was designing heavy cotton work pants hammered with rivets in the pocket corners to make them more durable. The company, "Levi Strauss & Co." couldn't sell enough of their "waist high overalls" to the miners, lumberjacks and farmers. And, well, you know the rest of the story.

Sam Brannan, California's first millionaire, employed a similar strategy. Brannan bought up all the prospecting equipment in the area. When the rush began, he re-sold the merchandise at a steep markup. He did very well, selling as much as $5,000 (about $155,000 in 2021 dollars) in goods per day to miners.

In the world today, there are several startups "selling pickaxes". Good examples of such businesses include Coinbase, Hopin, Stripe, Square, Shopify, Pipe, and many more.

In recent years, several companies have been able to successfully take leaves out of the notes of men like Samual and Levi. Modern pickaxe businesses are run by entrepreneurs who aren't exactly interested in becoming the next big thing. Instead, they choose to develop tools to help facilitate markets and make processes more efficient.

Let's look into some of them:

If there has been anything like a gold rush in recent years, it has to be the global rush for Bitcoin and other cryptocurrencies. The global adoption of cryptocurrencies has been exponential and they are now worth about $2.4 Trillion collectively.

But while the world was scampering for Bitcoin and other coins, Coinbase emerged to supply them with a pickaxe.  The platform enables tens of millions of users to buy and sell the most popular crypto coins such as Bitcoin, Ethereum, Litecoin, and about 90 others. Users also get to send and receive coins and convert them with ease and Coinbase collects a small transaction fee on each one.

Founded in 2012, the company is now the number one crypto exchange in the US. It was also America's first trading company to go public.

Another company that thrives by creating products and services needed by other companies is Shopify. Shopify is a software application company that has taken advantage of the increasing popularity of online shopping. It provides small businesses with platforms that enable them to create online stores with which they advertise, sell, and ship their products.

Though the service requires a monthly subscription, it is incredibly popular thanks to its affordability and ease of use. It has also been a game-changer for merchants globally. Today, the company is worth $135 billion. It is also the number one publicly-traded company in Canada and is used by over a million users in 175 countries.

Since the advent of the Internet, a lot of businesses, from casinos to drug stores, have continued to move into the online space. But for consumers to be able to pay for goods and services online, someone has to be there to deliver the money to the sellers and service providers. This is where Stripe comes in.

Stripe is a company that provides businesses with a platform through which they can process transactions online. With Stripe, customers can make payments securely via either credit card or bank. The company is the go-to payment platform for several businesses because it combines simplicity and high-level security.

In 2021, Stripe is worth an incredible $95 billion and as a result, it is currently Silicon Valley's most valuable private company.

How to Spot Investible Pickaxe Businesses

In the right market, it’s clear that the pickaxe strategy As an investor, you should be looking for the modern gold rush. I view this as any market growth at over 10% year-over-year.

A) Recognize a Groundswell of Demand - aka “Gold rush”:

Your goal is to find a market growing at over 10% year-over-year. While this type of market growth isn’t mandatory, higher growth markets are generally newer, with less established competition and more problems to solve. There are many examples of high growth markets or trends shaping industry, including Machine Learning, 5G, eCommerce, Telemedicine, Crypto, Robotic automation, Amazon FBA, App Development, remote work...the list is endless.

B) Document the process and survey the tooling Landscape:

After finding a high growth market, the next step will be to survey the tooling landscape.

Let’s examine Machine Learning (ML). Today, a mature ecosystem of machine learning tools does not exist.  As a result, ML practitioners generally manage their workflows in ad-hoc ways: documents saved on their local hard drives, in sequentially-adjusted file names, even by hand. These methods are not sustainable or scalable.

As you break down the ML process further, you’ll see defined steps and processes. For example, to implement an effective ML model, a company needs to be proficient in data labelling, dataset augmentation, model optimization, tracking, version control and monitoring.

All of these steps represent multi-billion dollar companies.

Determine where friction exists and a process can be simplified: With a deep understanding of the customer problem and the steps needed to solve this problem, you may discover ways to simplify business processes (e.g cheaper, faster, better).

To recap, it’s never a bad strategy for a startup to approach a problem with a facilitator mind-set. If they can become the market-leader in a nascent, but high-growth market, you may have a unicorn on your hands.

Hope this was helpful! See you next week ✌️