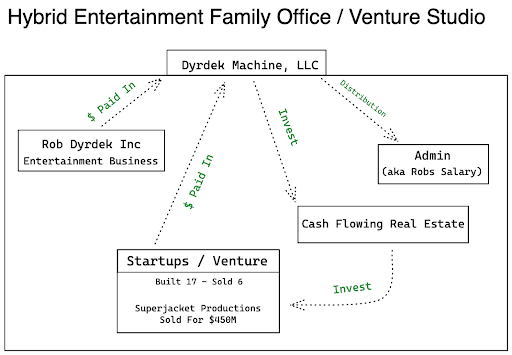 This week is a big one for EPO - we’ve launched Expert Sessions! Our video series with top-tier investors & operators.

Watching Expert Sessions, is like sitting down with a successful friend and having them share the rules of the investing game - check it out here!

Today, we’re going learn about a former pro skateboarder that sold his business for $450M and built a machine to systematically build and sell startups.

Rob Dyrdek, the founder of Dyrdek Machine, has built one of the most recognizable brands in the extreme sports industry - but it wasn’t always so easy. He was once told his business was “unsellable”.

This is his story...

1988 - Skateboarding takes hold 🛹: Rob starts skating for a local skate shop. He begins to see how skateboarding can become a career, but he also starts to see himself as a brand as he watches a company built around him.

1990 - Turning pro as a skateboarder 🎊: Rob turns pro skating for Alien Workshop, a company he helped form. Rob moves from his hometown in Ohio to Southern California to further his skateboarding career. He would one day acquire Alien Workshop for $4 million and return it to its founders free and clear.

1995 to 2005 - DC Shoes Sponsorship and global success 🌎: Rob becomes a very successful skateboarder but realizes he has a passion for creation as well as the sport. He works with DC Shoes to create a skateboarding skit that would evolve into a show for MTV.

2006 - MTV comes calling 📺: Rob’s career takes a drastic turn when he and his best friend/bodyguard Chris Boykin star in a new MTV reality series called Rob and Big. The transition represents a turning point in Rob’s life giving him a creative and entrepreneurial outlet outside of skateboarding.

2009 - Fantasy Factory and big dreams 🚀: Following the success of Rob and Big, Rob premiered Fantasy Factory, another MTV reality show where he showcased balancing his life between skateboarding and business ventures. Rob uses his opportunity on Fantasy Factory to launch several new businesses (most of them failed), tv shows, and set 21 world records. As far as he is concerned, he is a massive success.

2011 - Lightning strikes with Ridiculousness 🌩: Rob found success with Rob and Big and Fantasy Factory, but nothing prepared him for the success he found with Ridiculousness. The show is into its 25th season and controls approximately 60% of MTV’s programming. Rob can seemingly do no wrong.

2013 - A wake-up call ❗: Rob decides to more heavily invest his time in his entrepreneurial enterprises and attempts to take his brand to market.

As he recounts in a later interview, he thought “it was time someone recognized him and made him the billionaire he was supposed to be”.

To Rob’s surprise, he is told that he’s too reckless with his money and time and what he thought were successful ventures were really smoke and mirrors. No one would invest.

2015/16 - An attitude change 💡: Rob uses his experiences in business and entertainment to define a new way of looking at his life.

He creates Dyrdek Machine as a business building company and decides to reshape how he lives his life.

At this point, all business ventures, real estate properties, and other revenue streams are owned by Dyrdek Machine, so he’s able to consolidate and organize much more easily. Over the next five years, he will open 18 businesses and sell five netting him $450 million.

2021 - Do-or-Dier Visionary Foundation Launches 🚀: In an effort to help young, would-be entrepreneurs, Rob launches his non-profit “Do-or-Dier Visionary Foundation” with a mission to inspire and empower underestimated entrepreneurs. The foundation is built on four core beliefs: Entrepreneurial Mindset, Power to Create, E qual Access, and Ideas from All. He’s looking to collaborate with both the underrepresented youth of the nation and the formerly incarcerated looking to start a new path.

How it all flows together ↕:

Rob lives in what could very easily be a chaotic world, but he works hard to maintain order and structure. To keep organized, he’s built what he refers to as a “hybrid, entertainment-family office/venture creation studio.”

It starts at the top with one LLC, Dyrdek Machine. All capital flows into that entity. From there, he’s able to dispense funds to his cash-flow real estate holdings and ventures that he co-finds and creates (which is almost every company he builds).

Despite operating several entities at the same time, Rob’s structure keeps everything consolidated into one LLC making organization of his capital much more manageable.

Rob built a business that builds businesses. What a tagline. But how does he do it? He calls it the “Machine Method”, and it starts with an idea.

The method systematically goes through five stages to produce a functioning company.The stages are:

1) Discovery: The Discovery phase is an assessment process to determine if there is a desire to dedicate resources to weighing the viability of a potential opportunity.

Once they determine the idea fits this basic criteria, they then do a “Machine Principle Assessment” to determine if the opportunity is the right fit for the Dyrdek Machine.

2) Diligence: The Diligence phase is the initial development of the opportunity as well as the validation period before partnership.

This is not only a time to develop the beta of the overall business, but also a time to seek out as much knowledge and expertise to help validate the assumptions of concept, market and opportunity.

At the end of this phase they decide to commit the capital and create the company based on an investment hypothesis.

3) Build: The Build phase will focus on defining and developing the core to more consumers, then creating the initial product, and brand concepts for testing using the “Machine Core Elements”.

Then the product and brand along with a refined investment hypothesis will be presented to potential capital partners and prepared to go-to-market.

4) Launch: The Launch phase is the most exciting yet difficult phase. Even with the most thorough, strategic plans, taking a product to market and growing a business requires an immense amount of energy and determination.

Once the product is in market and the company has been operationalized it is non-stop customer development and hypothesis testing until the company has found product-market fit and a clear business model.

‍5) Scale: The Scale phase will optimize systems and processes now that a clear business model has been developed and the company is ready for accelerated growth.

Based on the initial exit strategy developed as part of the investment hypothesis the business will seek to be acquired or create a liquidity event.

Human Optimization: Rob Tracks every minute of every day ⏱

Rob considers himself human optimization. He didn’t get there overnight, and it’s not easy. But one thing he strives to achieve is balance. He’ll be the first to say he wasn’t always like this, but after a rude awakening from some potential investors, his whole outlook on life changed for the better.

We took a look at Rob’s incredibly sophisticated business structure, but in life, Rob focused his organizational energy on technology for help. He had someone custom-build software utilizing the Google Suite to help him plan every minute of every day.

He firmly sticks to this life plan. His time is divided up as follows:

This is how a formerly reckless skater boy becomes “human optimization.”

Along with his custom scripts running in Google Calendar, Rob quantifies his days on a scale from 1-10 using various criteria like whether he woke up at the right time, “brain-trained”, went to the gym, etc. This way he can quantitatively look at visualized data to show whether or not he’s living the optimized life he wants to live and if not, where he can improve. The level of visibility on what are normally intangibles is astounding, but it’s how Rob stays…Rob!