How to Evaluate a Business

Finding a billion-dollar startup is hard. Despite these odds, 7 of these companies were created by the founding team at PayPal. Affectionately called “the Paypal Mafia”, these individuals are some of the most prolific entrepreneurs in Silicon Valley and have created companies like Tesla, Linkedin, Square, Youtube, and Palantir. Let's find out how! 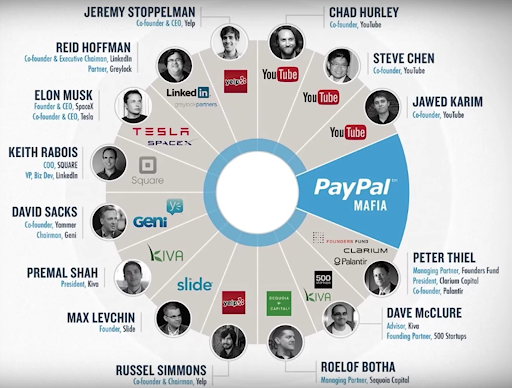 Finding a billion-dollar startup is hard.

According to Aileen Lee, a VC who coined the term “Unicorn” 🦄 to represent a venture-backed company worth over $1B, the probability of creating a $1B+ company is ~.07%.

Despite these odds, 7 of these companies were created by the founding team at PayPal. Affectionately called “the Paypal Mafia”, these individuals are some of the most prolific entrepreneurs in Silicon Valley and have created companies like Tesla, Linkedin, Square, Youtube, and Palantir.

I had to do some light number crunching here.

There were 220 “early” PayPal employees. 14 of these employees went on to create 7 multi-billion dollar companies. The back-of-the-napkin math tells me that this group of early Paypal employees was 90 times more likely to hit unicorn status than the average bear (6.36%/0.07%). This is a true statistical anomaly and worth exploring.

See the PayPal mafia below, many of these names you’ll recognize like Elon Musk, Reid Hoffman, and Peter Thiel.

What did these founders learn at PayPal to achieve such unusual success?

Well, David Sachs (pictured above) is a member of the PayPal mafia, and he believes he has the answer.

David has had a uniquely successful career.

David has captured his learnings and put them into a functional mental model. Luckily, we can borrow it...let’s dig in.

The Mental Model To Identify $1B startups

David believes that if executed well, this model provides a framework for billion-dollar successes. The mental model consists of four steps, each building on one another.

1) Market Need: A founder must first identify a market need that isn’t readily being addressed. This is non-trivial because markets are typically quite efficient. It’s also important that the founder is building is a step-function improvement to other solutions in-market and not just an incremental change. An incremental change will not create the value necessary to support explosive growth.

The trick is to find a market in which a company can get a foothold and then expand quickly. This often means that these markets are small, causing competitors to overlook them, but incredibly high growth. For example, Facebook originally started as a platform for Harvard Students. On its own, this is a very niche, and unexciting opportunity, but the network effects were powerful, and very quickly Facebook expanded to all ivy league schools, then all colleges, and finally the entire world.

2) Product Hook: A product hook is a simple behavior that customers will repeatedly engage with. This is also commonly referred to as the “aha” moment. Here are a few examples:‍

It is very important to start with a simple product hook. If the user doesn’t engage with simple behaviors, it will be incredibly challenging to get them to engage with complex behaviors.

A market can be discovered after building a truly valuable product by watching who uses the product and why.

This is how Square was founded.

“When we started, we thought we were just building a piece of hardware to enable people to plug into their phone and swipe a credit card.” - Jack Dorsey, CEO of Square

By launching the product first and learning from its adoption, founders discover the market insight, then build the organization they need to operationalize it.

3) Scalable Distribution Model: A breakout startup needs to figure out a way to innovate on its distribution as well as the product. The process of attracting and converting leads to paying customers is the lifeblood of a startup, yet many founders don’t put in the energy to develop a unique distribution model.

There are many types of distribution models. It could be SEO, Performance Marketing, Network Effects, Virality, Account-based email marketing...the list is long.

The real challenge is identifying something new. You’re always fighting the law of distribution arbitrage, which states that successful distribution techniques are copied until they are no longer unusually effective.

4) Moat: A challenge with the majority of companies is that they can be copied. Once a company has found success and competitors sense an opportunity, you can be sure they’ll want their piece. This is why it’s important to create defensibility.

There are numerous examples of moats that a company may choose to deploy. I’ve shared a few below:

It is impossible to figure out all 4 of these steps before a company is in-market. But if a founder takes the time to proactively think about 2-3 of these steps, they’ll be in a great position to create a meaningful business.

This time-tested framework by David Sachs is a great representation of one way a billion-dollar company can be built. Like any model, it has its flaws, but when accompanied by first principles thinking this can superpower your diligence efforts as you hunt for those mythical unicorns 🦄 🦄 🦄 .