Fred Wilson is the founding Partner at Union Square Ventures - one of the most successful Venture Capital firms in the country, known for their investments in companies like Stripe, Twilio, Twitter. Last week, Fred shared his perspective on the current Venture Capital market. Most notably, early-stage companies raising at ultra high valuations. So what’s the lesson? If you don’t underwrite appropriately...you’re delusional. 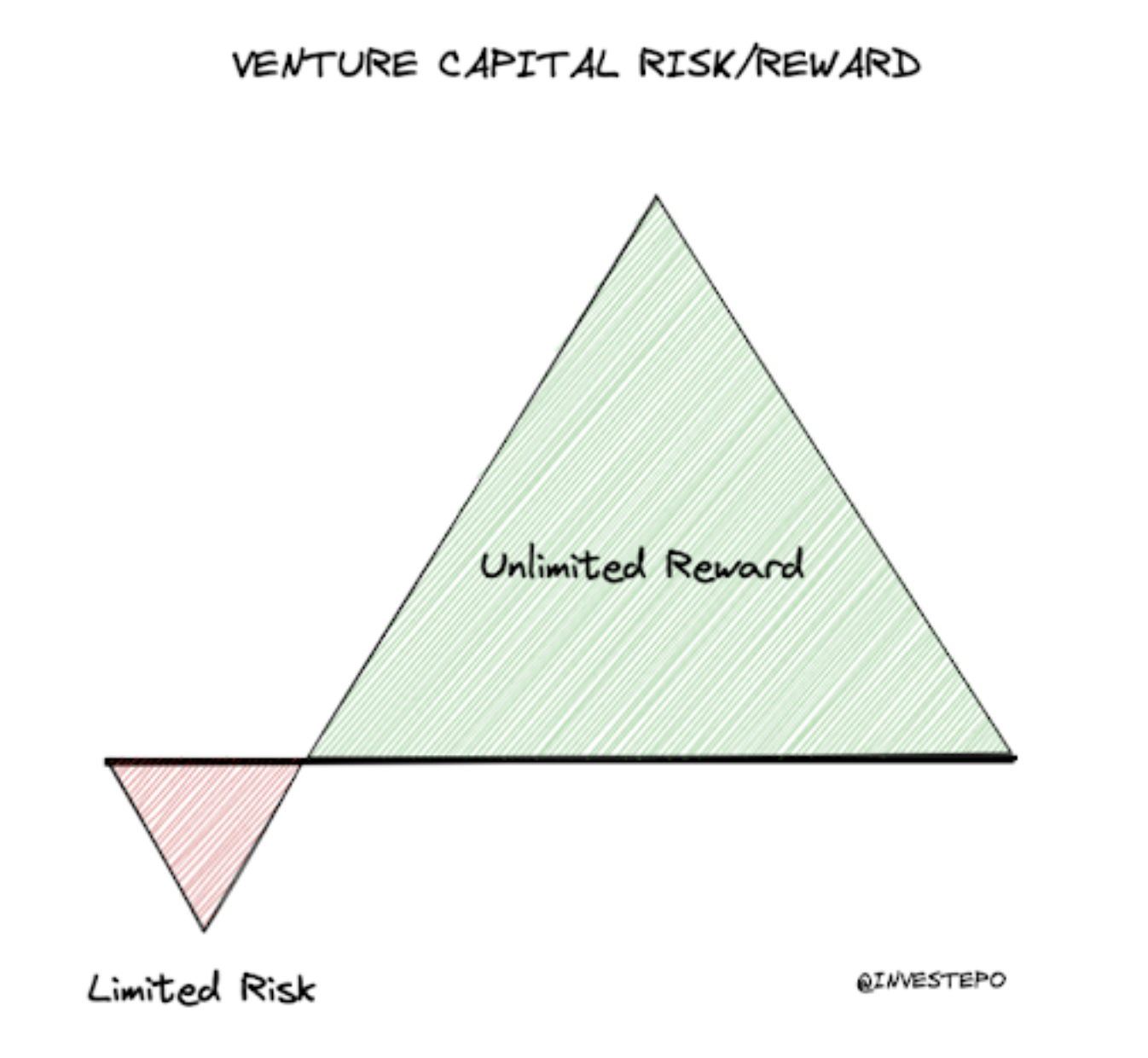 Fred Wilson is the founding Partner at Union Square Ventures - one of the most successful Venture Capital firms in the country, known for their investments in companies like Stripe, Twilio, twitter.

So what’s the lesson? If you don’t underwrite appropriately...you’re delusional.

Know the odds and you’ll set yourself up for success - below you’ll see that the chances of investing in a company over $100B are extremely low...in fact, Fred has never done it.

I thought I'd share more context by reflecting on the VC market today, the logic behind VC returns, and what happens when risk and return aren’t aligned.

Venture capital was the best-performing private capital strategy at the beginning of 2021, racking up an IRR of 19.8 percent in the first quarter, according to PitchBook. It even beat the booming private equity buyout sector, which notched a 17.8 percent IRR.

But with valuations as high as they are, I'm getting concerned.

I’m concerned that firms are overpaying because they are not estimating risk accurately.

Unfortunately, venture capital firms must evaluate the risk of what are, by definition, novel and idiosyncratic assets, for which there are no reliable third-party evaluations or historical data. Venture firms use combinations of subjective measures like the industry knowledge and track record of management, and guesstimates of the potential of a new product or service. Given that over half of venture-backed startups fail outright, those measures leave something to be desired.

Today’s “everything bubble” environment makes the task even harder. Meagre or negative real rates in fixed income have led to some astonishingly distorted risk assessments and valuations. Zombies – companies that must borrow just to stay in business – now issue junk bonds at rates the World Bank would have envied 20 years ago. Tesla, with a 1.2 percent share of the global auto market, has a market cap equal to the 10 biggest automakers combined. WeWork, a company that apparently heats its buildings by burning cash, has lost $13.6 billion on $10.5 billion in revenues since 2018. Yet investors lined up to buy shares in its Spac-merger IPO.

Venture capital isn’t immune. Valuations are climbing at an unprecedented pace. Startup and early-stage companies saw their average valuations double with each round of financing in 2021, a record, according to PitchBook. In 2020, the average was 1.5 times.

This increase in the rate of change of valuations only makes sense if the target companies will provide outsized returns upon the venture firms’ exits. Venture capitalists watching corporate catatonics raise fortunes in equity market debuts can be forgiven for thinking their portfolio companies will receive similar welcomes.

There is also the risk that the current valuations represent the top of the market. The moonshot asset prices seen in major markets today are mostly caused by what Wall Street traders call a "technical bid" - demand driven by market circumstances (in this case, by 13 years of central bank interest rate suppression) rather than fundamental value. Unfortunately, high asset valuations caused by technical bids have, throughout history, always reverted to their long-term means when the factors that caused them went away. That might happen soon. Central banks are winding down their rate-suppression measures because of inflation. Worriers worry that this will knock over technical dominos that will eventually affect the venture capital sector.

That scenario has proven painful in the past. Wall Street skeptics often say, “The worst deals are done in the best of times.” Overpaying for assets by underestimating their risk is characteristic of boom times like the present, as dealmakers who lived through the dotcom era (capped by AOL’s disastrous purchase of Time Warner) and the mega-LBO boom of 2006-07 (which ended with the equally disastrous LBO of Tribune) can attest.

What is the logic behind VC returns?

Venture capital might be able to ride out such a storm, because it differs from other asset classes in that investors expect most of their bets to go bust. That is the nature of startups – around half go out of business, while a few go on to do extraordinarily well. The key is to find one or two of those high-performing companies.

This is reflected in the shapes of venture capital’s distribution of returns. The performance of most types of assets in a typical portfolio can be represented by a normal distribution, or bell curve, shown below on the left. In these cases, most assets are average performers, with those at the tails of the distribution doing very well or very badly. The performance of startup or early-stage companies in a venture capital portfolio, by contrast, follows a power law distribution, where most or all the returns come from a handful of high-performing investments.

Research by Andreessen Horowitz showed just how steep venture capital’s power law distribution is. The firm examined a database of fund performance dating back to 1985 and found that about 6 percent of investments representing 4.5 percent of dollars invested generated about 60 percent of the total returns. This implies that the frequency of winning investments is far less important than their magnitude. It also shows why large funds, which can afford to make (and lose) more bets in pursuit of one or two big winners, outperform small funds.

According to the Andreessen Horowitz research, “The home runs for good funds are around 20x [the invested amount], but the home runs for great funds are almost 70x.” This is called the Babe Ruth effect. The ballplayer once said, “I swing big, with everything I’ve got. I hit big or I miss big.”

In Venture Capital, you have limited downside and unlimited upside potential.

Venture capital firms can afford to see most of their investments struggle or fail, in part because their investments are asymmetric. That is, their downside is limited to the amount of money they invest, while their upside is theoretically unlimited. This is not unique. Almost all investment strategies (other than selling call options) have a bounded potential loss. But outside of buying equities and options, there are few with unbounded upside potential. For example, if you buy a bond, the issuer doesn’t default, and you hold it to maturity, you know exactly what you will earn. Not so with venture capital.

To understand the challenges of measuring valuation and risk in venture capital, compare it to another asymmetric investment, purchasing a call option on a stock. The premium paid for the option is like the venture firm’s investment. If the option expires with the spot price below the strike, the investor loses the premium. If the company goes bust, the venture fund loses its investment.

But that’s where the similarities end. Option pricing formulas like Black Scholes use observable quantitative inputs like the spot price and historical volatility. These aren’t available for startups. So rather than applying a standardized quantitative valuation approach, venture capital investors must use subjective, qualitative measures.

Even worse, in most markets one can estimate an asset’s value by looking at recent transactions on comparable assets. This is one way that real estate appraisers value properties. But the point of investing in startups is to find companies with novel products or services, which are, by their nature, idiosyncratic. You don’t value the purveyor of a transformative mousetrap design by comparing it to a bunch of old-fashioned mousetrap mongers.

Also, the way that risk gets baked into the valuation of public companies doesn’t work with startups and early-stage companies. Equities analysts and investors determine the potential volatility of a company’s earnings stream by looking at the historical performance of its stock and those of comparable companies. They apply a higher earnings multiple – and therefore a higher target stock price – to those with low earnings volatility. For example, analysts usually assign higher multiples to industrial companies than to financials, on the assumption that the latter industry’s earnings will be more volatile over time. By contrast, startups and early-stage companies have no history of earnings from which to draw volatility estimates.

Because of these factors, venture capitalists have always had to make educated guesses. They only have to hit a few home runs. And their inevitable strikeouts are on asymmetric bets, so they do not face catastrophic losses every time a portfolio company fails. Nonetheless, even the most educated of educated guesses, if it leads to overpaying for an asset at the top of the market, could end up looking downright ignorant.

I hope this think piece helps you better understand how the logic behind VC returns and why it is so important to understand the entry price you’re paying when investing in startups.

Hope this was helpful! See you next week ✌️